Dismantling and installation of a new pool window in Moscow

Selection of the right material at the stage of building a pool plays an important role in its further operation, and any mistake can lead to a serious problem. The specialists of our company faced the need of changing the underwater window in the indoor pool.

​Error in the choice of material and its implications

A pool was built 7 years ago and at the planning stage it was already intended as a swimming pool with underwater window. Despite of presentable design of underwater window, the glass was matched not correctly.  The matter is from the very beginning an underwater window was made of  triplex (laminated glass). The construction of this glass panel is quite simple, two silicate glasses with thickness of 19 mm were glued between each other.

Triplex, of course, has several significant advantages, but as the experience of our company shows, when it is installed in the pool, its quality is rather doubtful. Perhaps, there was not access to the high quality materials or the manufacturer did not consider the features of the triplex.

5 years later, the underwater window began to exfoliate. The layers of silicate glass in triplex are glued together by means of a film. A lot of properties of triplex depends upon this film. But because of constant exposure of water, the film begins to flake. It spoils an appearance of the underwater window and the construction became less durable. As you can guess, it could lead to leaks and possibly flooding of the premises.

The first underwater window was quickly replaced by a new one, but also made of triplex. The situation with the second underwater window was the same, but the period of its lifetime was only two years. And only after this the owner of pool have made a decision to contact our company. Knowing about the shortcomings of the triplex, we recommend to use more modern and suitable for the role of the pool window material – acrylic. 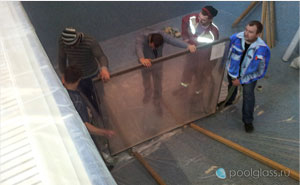 ​The installation of acrylic underwater window

The selection of acrylic for the manufacture of the window has a lot of reasons. Today, it is the only widely available material with high (98%) degree of transparency, which is resistant to prolonged exposure of water and chlorine used in swimming pools for disinfection. It is worth to admit that quality of modern acrylic panels is almost perfect, thats why manufacturer gives a guarantee that acrylic window will not turn yellow for at least 30 years. 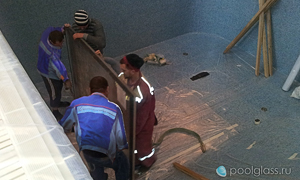 Before the installation of window in a pool, the specialists of our company have performed the preparation works, they dismantled the old window made of triplex and repaired the quarters on which it was mounted. Also, employees have performed work on deepening quarters for fixing the window in the openings.

Only after this there was an opportunity to install the new high quality pool window made of acrylic. Its size is 1700 х 1300mm, so it is a quite large window. The four-side support allows it to withstand considerable pressure, because the water level from the bottom panel of the window is 2400 mm. 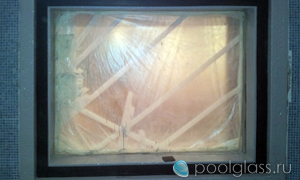 The works were performed on a high quality level. The special attention was paid to a sealing works of the pool window, because this is where a leakage can occur. For its sealing high quality materials were used, which are specifically designed for such conditions. Thenit was only required to install the acrylic panel, keeping a uniform gap between the glass and the supports that has been done. Quality sealing of openings ensures no leaks. 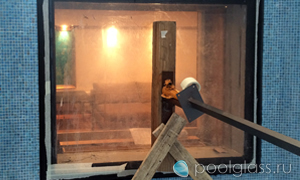 Except the replacing of the underwater window, were carried out additional work on the decoration of the pool. The outer perimeter of the glass has been finished with a decorative frame of a nice cream color, which was also made of acrylic. Thus, the window has become more holistic and harmonious. Besides there was a restoration of the decorative facing tiles around the window and along the perimeter of the pool.

Acrylic window is so transparent that creates the illusion of a complete lack of any barrier between the pool water and the observer. It is possible to install such an underwater window in any pool and to make it almost in any form. In this case, it was a standard rectangular pool windowof large size.

Now the owner of a pool has no the danger of water leaks and can use the pool for fun and relaxation again. Because of hasty decisions on the choice of glazing material, it was necessary to spend twice its restoration to get not only reliable, but also an attractive swimming pool, which will not lose their excellent qualities after many years.