Earlier the glass pool or transparent underwater windows in it were really exotic, but now new technologies has made such design an ordinary and popular thing. But even now there can be the serious errors when designing such pools, which may result if not a complete overhaul, at least, quite serious financial costs. One common error is the use of the silicate glass triplex in the construction of the underwater windows. Of course this material has advantages and it was very popular among the manufacturers of the modern pools and their clients before the onset of the era acrylic (unfortunately it is still popular sometimes). But there is a number of serious drawback, which previously were ignored. Now, there are better alternatives and they should be taken into account.

The first disadvantage is aesthetic. The window made from glass triplex has  greenish bottle shade. Another reason for these color is the thickness of the glass, as though silicate is durable material, but it is not flexible. Therefore, it is necessary to use thick enough layer in a large pool. It is not completely transparent and with the increasing thickness of glass, its dimness is becoming more noticeable. Someone can say that this is normal, and all the underwater windows will have such a look over time. But acrylic glass has changed such an opinion. To produce the underwater window it requires a thiner layer of acrylic, and it is much more transparent than even the highest quality triplex. And after meeting with such crystal clear pools, it is not fun to enjoy the marsh shade of water through a silicate window.

The fragility of the material

The second reason is the fragility of the triplex. It is not simply designed for constant pressure that occurs in the pool. The reason of it is that each layer of glass is too thin and over time may simply crack under the constant pressure of the water.

The alternative variant is to use the expensive and very thick glasses, but the window will become even less transparent, or, to use the acrylic glass. Unlike silicates, acrylic is more flexible and durable, it can withstand the great pressure even with a relatively small thickness.

As a result, pool windows remain intact, and the pool owner gets rid of the need for urgent repairs. 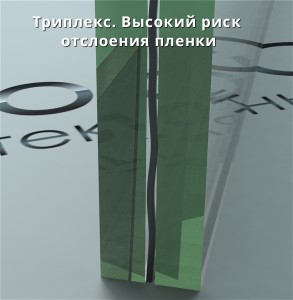 And finally, to learn about the third disadvantage of triplex in the role of glasses for the pool, it is necessary to examine the structure of this glass. In fact, it is a multi-layered package of several silicate glasses, which are glued together with a special film. It is because of the film, the cracked glass is not broken into fragments, and remains "decorated" with a network of cracks.

The quality of the gluing of such glasses is determined by the quality of the film, including testing the hydrophobicity, i.e. resistance to water. But, no matter what is the quality of film, prolonged exposure to water pressure is disastrous for it. Over time it loses its hydrophobic properties and exfoliates. As a result, not only the appearance of this window becomes worse, but also decreases its strength.

International norms and standards for the construction of underwater windows

According to the norms of the Russian Federation (GOST 23645-79, GOST 21672-99, GOST 19261-98) and international standards (ASMIE PVHO-1 and PVHO-2) material triplex (and other glass) is not only not recommended, but prohibited to be used in construction of underwater pools windows that will be used by people. 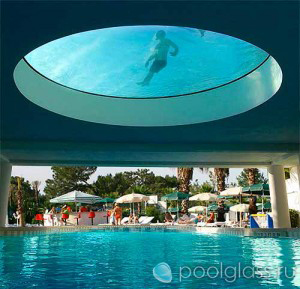 Main reasons of the prohibition on the use of the triplex is that this material is traumatic (with strong water pressure, the glass may crack, which will cause harm to humans), a big weight of glass triplex and the difficulties in its installation (the more water pressure – the larger must be the thickness of the glass). According to the norms for the construction of underwater windows should be used acrylic, or alloys of sturdy plastic.

Acrylic has no the disadvantages of the triplex. It remains transparent and does not becomes pale with time. A layer of acrylic is much thicker than a single layer of glass in the triplex, so the window itself is much stronger. It is possible to see a crack on this window, breaking it intentionally. Finally, it is constant to exposure of water. There are no elements, which can be spoiled because of moisture, exfoliate or lose any useful properties.